Carnival of the Liberals #83: Obacalypse Edition

It's time for the next installment of the Carnival of the Liberals and guess what folks, in honor of the hijacking of America's future by the blasphemer Barack "Hussein" Obama, this carnival is being hosted by yours truly, Doctor Snedley; the physical manifestation of your worst liberal nightmares.
But don't worry, if I say anything to hurt your widdle feelings, I'm sure the Sympathizer-in-Chief would be happy to comfort you; assuming he's not busy playing footsies with the Mullahs or begging Hillary to bail him out of the latest international blunder he walked right into.  If only Cheney had run for president...
The Bush Sux Meme
And so we begin

the carnival with a theme all liberals enjoy: The Quest to Destroy Bush.  And sure, we've heard it all before: He didn't read liberal rags, he didn't predict the unpredictable, he had the temerity to fight back against Islamofascism, he didn't talk so good, he let a city drown, yadda, yadda.  We get it already.  You don't like the guy.  So what?  We hate your guy, but you don't see us calling him names or allowing partisan hatred to blind us from saving the world.  All our criticisms are true.
And so even now after your guy "won," you just can't let things go.  It's bad enough that you failed miserably at undermining the Greatest President of Our Generation, but you've now realized that there is only one possible way to tarnish Bush's crushing success: Historical Revisionism.
And with that, I present to you the We Can't Quit Bush posts:
First up is the appropriately named Vagabond Scholar, with a post of Hall of Fame Material; in which Vagabond attempts to downgrade Bush's awesome record by comparing him to a disgraced professional sports team.  Sorry Vag, but I'm just not getting it.  Sports aren't politics.  It's that simple.  And no, calling it an "analogy" doesn't make it better.
Next we have Atheist Revolution insisting that We Must Hold Bush Accountable.  Huh?  Bush was "accountable" for running the free world for eight full years.  And if he hadn't done such a great job at it, we wouldn't see freaks like Atheist attempting to smear Bush's awe-inspiring reputation with these sort of tirades.  Besides, what's this "We" stuff all about?  Will you fascists never tire of speaking for the rest of us?
Next up is an Open Letter to President Bush from some dude named US Common Sense.  And yeah, like President Bush is going to waste the first vacation he's had in over eight years by reading some "open" letter a blogger wrote to him.  Dream on, Common Sense.  You'd have been better off dropping it in the mail to his ranch down in Crawford, where he'll be relaxing to some good ol' brush clearing; like all us real Texans do.  I can't wait to get my invite!
And as if

that wasn't enough, we've got Larry Niven of the Rust Belt Philosophy saying Truth is also less strange than fiction, but nobody likes to talk about that - here's why (Looks like somebody needs to take Headline Writing 101).  And this is yet more of the same Bush revisionism drivel that seems to be required writing by all liberal bloggers; on assignment from George Soros, no doubt.  And yeah, Bush is an idiot, Bush is a murderer, more of that same drivel.  And not one reference to Bush's über-brave pitch at the 2001 World Series.  Must you people always ignore his successes?
And rounding out the We Can't Quit Bush section is Mad Kane, who uses some sort of rhyming letter gimmick to give An Alpha-Political Farewell to Bush and Cheney.  In it, you'll learn that Bush and Cheney "destroyed" the economy (as if!), Lieberman is a "traitor man" (only to libs!), and that the terrorists have now won (I agree!).  Now maybe that The Savior has "won," Kane can stop being so mad and get a real job.
And that's it.  It's time to move on, libs.  Stop living in the past.  Let it go.  Bush is the most successful president in world history and your best efforts at tarnishing his perfect record have failed.  Now it's your turn to fend off the rabid dogs of partisanship while we get busy on our corrections at Rushmore.
Non-Bush Stuff
And here's a funny one: 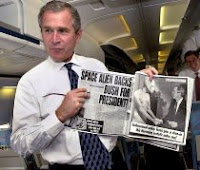 It's a lib complaining about conspiracy theories.  That's right, a liberal.  We've got Greta Christina's Conspiracies and Unshakeable Faith: What Would Convince You That You Were Wrong? Part 2.  And dammit, wouldn't ya know.  I missed part one.  Dick Cheney deleted it from my harddrive when he was plotting 9/11, no doubt.  Or perhaps Rove did it as he "outed" CIA desk jockey Valerie Plame.  Will you people never learn?  If the government doesn't agree that it happened, it didn't happen.  Assuming it's a Republican government, anyway.
And to get your liberal bloodlust flowing, here's one celebrating the triumph of death over life by Ames at Submitted to a Candid World, titled Roe at Thirty-Six: the Accountability of Judicial Review, and Dispelling Gary Bauer’s Myths.  In it Ames attempts to refute Gary Bauer's utterly irrefutable point that Roe v. Wade was judicial activism at its worst and has absolutely zero basis in the Constitution.  And to debunk this, Ames uses lots of words that I couldn't care less about.  After all, Jesus doesn't like baby death: Case closed.
And to finish the Non-Bush section, we've got the latest marching orders on how to promote the Gay Agenda to the detriment of American values and God's protective aura.  It's Equal Marriage Now's Talking Points - Gay Rights and Civil Rights.  Komrade Kos will quiz you on them momentarily.  Anyone missing a question will lose their weekly tofu ration.  Be prepared!
Lord Obama Tribute
And how could we mark

the end of COTL's Obacalypse Edition without a few paeans to The One.  Sure, clinical tests have proven conclusively that his Holiness is, in fact, mortal, but I suppose if having a living embodiment of Baal is necessary to fill the void in your soul where God belongs; so be it.  It's good to see you nihilists finally believe in something.
And so we'll start off with Hoyden About Town's Invocation and Benediction: Call and Response?  And I'll just give away the big surprise: She liked the liberal's benediction better than the moderate's invocation.  Who'd have guessed.  It's like you people want God to hate you.  Sheesh!  (And as a personal aside, here's Doctor Biobrain's nihilist invocation.)
Our second tribute to Obama is a bit odd, as I already picked one of this dude's posts and didn't realize I picked two, but screw it.  We've got Ames from Submitted to a Candid World again with Obama’s Political Dynamic & the Shape of Things to Come.  And Ames rambles on about how he's a diehard Obama sycophant who will pretend to not act like a sycophant, but will end up doing so anyway because Obama's so perfect and great.  You have to read between the lines, but that's the gist of it.  I'm sure this ethical quandary will be over in three...two...one...stimulus!
And as a final display of love and devotion to the Great and Powerful O, we've got TWO, count 'em TWO posts about Obama looking like food; because one post just wasn't enough.  I've posted two of the pics here, but you should check out the full spread.  Here's All My Faves' Inauguration Party 2009! and In Your Face Chicago's Cake we can believe in: Odd and awesome Obama cakes. Geez people, you know you've got a cult of personality when you're actually eating your leader.
And that's it, folks.  A crapfest of liberal love and conformist claptrap, ensuring that you never have to think for yourselves or have your opinions challenged in any way.  Enjoy it while it lasts, libtards.  It won't be too much longer until Obama's Islamonazi buddies overrun our borders, rip off your heads, and infest your daughters with their Sharia Law rape babies.  And I'll be laughing my ass off the whole time watching it happen.  Don't say you weren't warned!

Change we CAN'T believe in, from a left-liberal whose left-liberal concerns about the Obama administration didn't make the CotL cut again.

Tim Geithner serial-lies to the Senate.

Haha. Thanks very much, Doctor Biobrain - I mean, Doctor Snedley. Entertaining, informative, and fine company. I'd add an analogy, but I know those are offensive. Cheers!

Sorry Gadfly, I had seriously considered it, but a post critical of Obama really didn't fit into the theme. It either had to be stuff attacking Bush, praising Obama, or pushing far-left liberal issues. I hadn't set out for that, but it just kind of wrote itself that way.

Thus said, I do think you're making a mountain out of a molehill with that one, but that had nothing to do with these selections. A liberal attacking Obama would have undermined the whole thing.

If you think that post title* was bad, you should've seen the one I wrote about the conflict in Georgia back when we cared about that. And anyway, I wrote that post back when Bush was still president - plus, if you were paying attention, you'd know that succeeding at baseball is equivalent (or at least isomorphic) to failing at life. So, in a sense, I guess he did a great job at that? Anyway, thanks for the link.

*This ain't no newspaper, so that's no headline.