Things I Learned From Never Too Young to Die

Below is a list of things I learned from the spy thriller masterpiece Never Too Young to Die, starring John Stamos, Vanity, and Gene Simmons. Enjoy!

1) Some cities have pipelines with highly radioactive waste in them.

2) Los Angeles has a pipeline that can easily send enough radioactive waste into their drinking supply to ruin it for ten thousand years.3) If goldfish are exposed to radioactive waste, they mutate instead of dying.4) You can divert nuclear waste into Los Angeles' drinking supply with a program on one floppy disk and nothing can prevent this from happening, unless you steal this all-important floppy disk.5) Bad guys don't make back-up copies of their all-important floppy disks.6) If you get a bad guy's all-important floppy disk, you should send it to your son, rather than destroying it.7) Never destroy the bad guy's floppy disk. Nor should you ever consider switching it with an identical looking disk. That would make things too difficult for the bad guys because, again, they don't make back-up copies.8) If you have the floppy disk and you want to lure the bad guy to you, you should use the people he thinks have the disk as bait, rather than just using the disk as bait.9) Make sure to put the floppy disk in a very unsecure location close to where you believe the bad guy will be.10) If you know someone on your side is a traitor, don't tell anyone else. It's probably not important.11) Psychotic hermaphrodite gang leaders have lots of resources at their disposal, including endless weapons, vehicles, and post-apocalyptic goons.12) Super-genius computer programmers enjoy working for psychotic hermaphrodites.13) Spy agencies should never allow agents to wear sunglasses, so hermaphrodite traitor agents won't be able to conceal their heavy eye makeup.14) Hermaphrodites are male and female, so they're better than the rest of us.15) Hermaphrodites are only half man, making them less manly than John Stamos.16) If you say the word "Stargrove" to a stranger behind their back, they will immediately recognize it as someone's name and ask you why you said that name.17) Underground secret spy lairs should always glow bright red when the key to opening them is nearby, in case your son needs to find it after you're dead.18) It's perfectly acceptable to keep top secret government files in your secret spy lair, even if it's easily found by accident.19) It's not safe to leave your crate marked "Grenades" in your barn, under the flammables.20) If killers want to torture you for information, they will knock you out, take you to your home, and leave you on the floor, untied. That way, when you wake up, there will only be two bad guys for you to fight.21) Industrial-grade furnaces have intercom systems inside of them, just in case you decide to chat with whatever it is you're burning.22) You can be almost burned alive in an industrial-grade furnace, yet still not get sweaty.23) John Stamos can cry real tears.24) Asian roommates are good for only two things: Impossible inventions and comic relief. 25) If you use gum to stick a listening device to something, you should put the device in the gum before you chew it.26) If you need to destroy a computer, be sure to close the case that it's in before you blow it up.27) That scumbag is named Stargrove.28) Hotshot gymnasts often practice by jumping up and down on trampolines while pointlessly waving their hands around.29) Wrestlers think they're more manly than gymnasts.30) Wrestlers are easily confused by the old "What's This On Your Shirt" Finger-in-Chin trick and will stop trying to bully you after you use it on them.31) If bad guys know you're coming, it's best to attack them anyway, even if you're horribly outnumbered and wounded; because they'll be "overconfident."32) Even if you're running late to your son's gymnastic meet, you still have time to do a little spywork.33) If someone is using a bulletproof umbrella to block your bullets, you should stop shooting the umbrella, because it's bulletproof and you're not hurting them.34) John Stamos really isn't into subtle flirtation. If you want to have sex with him, try going topless or showering naked with his garden hose. Otherwise, he just won't get it.35) Apples are no substitute for sex.36) If you're bored while waiting to be attacked by psychopathic killers, have sex.37) John Stamos is so hot that even psychopathic killers fall for his flattery.38) John Stamos can lift a much larger man with his legs while hanging from a railing.39) In 1986, John Stamos was too young to die.40) In 1986, Gene Simmons was not. 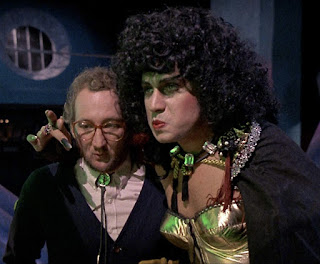 Posted By Doctor Biobrain at 2:22 AM

Where to Find Me